“The Complicated Path of Politics and Investments” 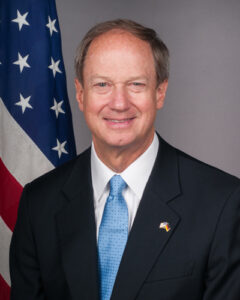 Join us for a conversation with global investment and political affairs expert John Emerson. John has enjoyed a fascinating career including the opportunity to serve as the US Ambassador to Germany from 2013 to 2017 where he gained a unique perspective on international relations. He’s since returned to a leadership role at Capital Group, where he has worked for 21 years. John will talk about various geopolitical topics based upon his experience working in Washington, DC and Germany. He will talk about themes such as globalization and trade. He will also discuss the Ukraine/Russia conflict and relations with China. We will have plenty of time for John to take our questions as well.

John Emerson is vice chair of Capital Group. He has 21 years of industry experience, all with Capital Group. He served as the United States ambassador to the Federal Republic of Germany (2013-2017). In 2015, John was awarded the State Department’s Susan M. Cobb Award for Exemplary Diplomatic Service, which is given annually to one non-career ambassador, and in 2017 he was awarded the CIA Medal and the U.S. Navy’s Distinguished Public Service award. Prior to accepting the ambassadorial posting, John was president of Capital Group Private Client Services. Before joining Capital, he was deputy assistant to President Clinton where he coordinated his economic conferences, served as the president’s liaison to the nation’s governors, and led the administration’s efforts to obtain congressional approval of the GATT Uruguay Round Agreement and the extension of China’s MFN trading status. Additionally, he was appointed by President Obama to serve on his Advisory Committee for Trade Policy and Negotiations. Before working in the Clinton White House, John served as Los Angeles Chief Deputy City Attorney, and was a partner in the law firm of Manatt, Phelps, Rothenberg, and Phillips. John holds an honorary doctor of laws degree from Hamilton College, a juris doctor degree from the University of Chicago and a bachelor’s degree in philosophy from Hamilton College.